Our Maps And Data

The position of any point in Great Britain can be described by its National Grid Reference. These references are often used in conjunction with Ordnance Survey maps, and are used to give the names of individual Ordnance Survey data tiles.

These components are usually written without spaces. However, spaces are included here for legibility.

Two letters together identify a 100km square, and are derived as follows:

The first letter identifies a 500km square, from the diagram shown here. Ordnance Survey’s products lie completely within four of these 500km squares: H, N, S and T. The letters are allocated in alphabetical order from left to right and top to bottom, and omitting the letter “I”. 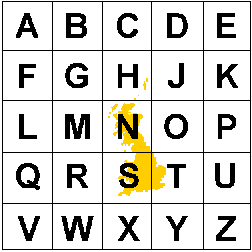 Each 500km square is then divided into twenty five 100km squares, and these squares are then labelled using the same pattern of letters. The resulting 100km squares covering Great Britain are shown here. 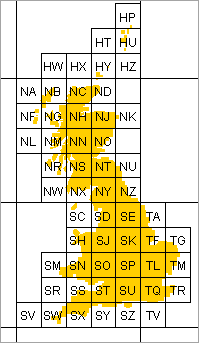 The digits identify a location within a 100km square.

If there is a quadrant name present, it indicates one quarter of the area indicated by the rest of the grid reference.

For example, within the square SK: 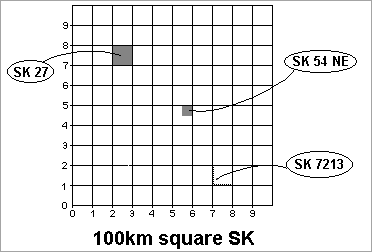 Eastings and Northings are measured in hundreds of thousands of metres (100,000 metres). The origin of the National Grid is 000000 (metres) East and 000000 (metres) North. For example, Jedburgh is at NT6520 or 365000 East, 620000 North. However, National Grid references are measured differently, using letters to represent the 100km reference, for example, NS123456. When using the Digimap Gazetteer service, you may need to convert from standard National Grid references to Eastings and Northings.

To convert a National Grid Reference to Eastings and Northings:

The details of the construction of the National Grid from latitude and longitude is mathematically complex.

In summary, the process is that the irregular shape of the Earth is approximated by an ellipsoid or spheroid. This spheroid is then transformed onto a flat surface using a mathematical transformation known as a projection. The National Grid is then a cartesian coordinate system calculated on the resulting flat surface.

Different spheroids and projections are used in different countries and regions of the world. For Great Britain, the technical details are as follows: